Why can't you see all twelve dots at the same time?

If you look at the image below, you might have noticed there are a few black dots in it. But did you also notice that there are twelve in total and that you can't see all of them at the same moment? No matter how you look at this picture, you will never be able to see all of the dots in one view.
So why is this? 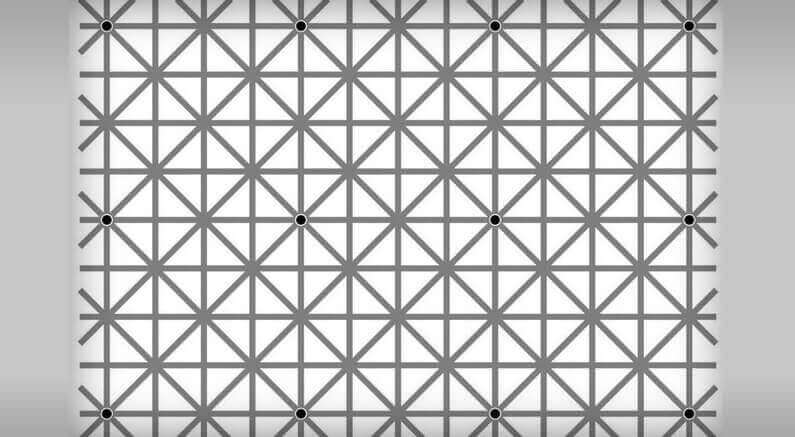 Don't worry, there's nothing wrong with your eyes. Actually, you could say that something would be 'wrong' with your eyes if you were, in fact, able to see all of the dots at the same time. This is a visual illusion, based on the fact that what you see doesn't always equal that what is present in reality.

The reason you can't see all the dots has to do with both the working of your eyes, as well as the working of your brain. Humans have a bad peripheral vision; the vision that occurs outside the centre of gaze. This means you can clearly see things that you focus on, things that are in the middle of your sight, but you can't see things outside of that very clear. Because of this, the brain tries to make the best of what is likely going to be in the fuzzy area of your view. Therefore, when you're looking at this picture, your brain fills up the black dots with the grey striped lines. Your brain just tries to make sense out of the things that it cannot process well because your eyes don't provide 'clear' information to it.

Besides that illusion, you could notice another, less visible, other illusion as well. If you look closely, you might see that the places where the grey lines intersect look lighter than the grey lines themselves. This also has to do with the surroundings of those intersections, though this has to do with contrast instead of focus.

Cells in the retina that detect contrasts, clearly register the contrast between the grey lines and the white around it. When the grey lines intersect, however, there appears to be less contrast because there is more grey than there is white in these spots. Because your retina registers less contrast, it makes your brain believe those spots are lighter than the actual grey lines, although they have the same colour.

For some people, this could even counteract the black dots, and make them look grey or white!