We from BrainGymmer present you with a list of amazing brain facts that you have probably never heard of. The brain controls everything we do and can be seen as the control centre for all the body’s functions, including talking, walking, your personality, your emotions, how you see things, how you learn and remember and so on. The brain is a very complex and mysterious organ. Some doctors and scientists have studied the brain their whole life and it is thanks to them that we know so much about our brain. Still, there are many facts about the brain that not everyone knows.

The human brain only represents 2% of the body weight, but it needs about 20% of your total energy every day. This means that the human brain is responsible for roughly 20% of our total calories burned each day, which is an astounding number! To put it in perspective: if you burn 2.000 calories a day, your brain activity is responsible for approximately 400 of those burned calories. Brain cells use a form of sugar called glucose to fuel cellular activities. This energy comes from the food we consume daily and is regularly delivered to brain cells (called neurons) through the blood. This is why eating healthy is so important!

Laughing is a universal language. From the USA to African tribes, everyone understands the concept of laughing. Despite laughing being a very common phenomenon, we do not completely understand the relationship between the brain and laughing. So far, researchers have learned that various regions of the brain are involved in the production of laughter.
During an experiment, researchers observed the following specific activities:

Why is laughing good for you?

As you can see, laughter is a complex brain activity that runs through many different areas of the brain. But why is laughing so good for you?
Researchers estimate that laughing 100 times is equal to 10 minutes on a rowing machine or 15 minutes on an exercise bike. Laughing seems to be a total body workout! Not only is laughing good to train your muscles, but also the psychological effects of laughing is amazing. People often store negative emotions, such as anger, sadness and fear, rather than expressing them. Laughter provides a way for these emotions to be harmlessly released. 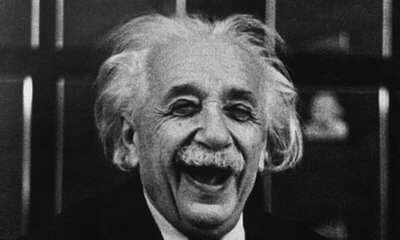 Fact 3 – The brain feels no pain

The brain itself is immune to pain. This is because there are no pain receptors in the brain. Surgery can be done on your brain and technically your brain doesn’t feel a thing. You might ask yourself how a headache can occur if the brain can’t feel pain. A headache is pain sensed in the nerves and muscles of the head and neck, meaning it is pain somewhere around your brain. The pain is picked up by nerve endings located in your head.

Generally speaking, comparing all the animals, a bigger brain size means higher intelligence. However, brain size must be seen relatively. For example, the sperm whale has enormous brains, weighing an average of 17.2 lbs! But considering body size this is logical. Larger animals need larger brains to run and monitor their large organs and a higher number of nerve endings. Their relative brain size is smaller than when comparing with primates. Thus brain size appears to be an indicator of intelligence. Does that mean that brain size correlates with intelligence when comparing humans to one another? It turns out that there is no correlation between brain size and intelligence in humans. Raw relative brain size doesn’t accurately reflect the number of brain neurons, and research shows that those are a critical component of intelligence

For a long time, we thought that intellect and intelligence was congenital. That the brain and how this organ develops was determined at birth. Recently, many neurological researches have shown that the brain can adapt itself throughout the years. The brain has the ability to create new connections between neurons (brains cells). This allows the brain to reorganize itself. Every day millions of neurons die and because of that, the brain has to constantly renew itself with new cells. Neuroplasticity is a continuous process in your brain. Research has shown that even among older people (50+) new neurons are created continuously. So it is not true that as you grow older, no more new brain cells are created. Even the elderly frequently create new brain cells.

Fact 6 – Men and women are not the same

Contrary to popular belief male and female brains do in fact differ in several areas. For example, women have their language areas more dispersed throughout the brain and for men, this area mainly lies within the left hemisphere. Male brains tend to develop faster on areas such as math and geometry, and male brains tend to be 10% larger. Female brains develop faster on fine motor skills. Male brains often have more grey matter (sometimes referred to as ‘thinking matter’) and female brains often have more white matter, which is the stuff that connects all the brain cells. However, most of the differences are complementary. That means that they increase the chances of females and males joining together.

Fact 7 – The brain is very active during the night

Although you might think that your brain is resting when you are sleeping, your brain is actually very active. Sleep can be divided in 5 stages:

The REM sleep is a very important stage for your brain and your brain tries its best to let it go uninterrupted. Your brain will try to incorporate an alarm clock into your dream or will transform the sound into something else. It is yet unknown why the brain tries to preserve the REM sleep.
As you can see while you are sleeping, the brain is still very active!