By Paul05 January 2015
Our brain is basically a lazy organ. It always tries to find solutions with as little effort as possible. This often works, but sometimes it can lead to mistakes. At times we consciously pick up on this, but it can happen also that we aren't aware of it. Below you can read about common mistakes our brain regularly makes.

We feel losses more strongly than gains. This is known as the ‘sunk cost fallacy’, but has been referred to by several different names over the years. One of those is the ‘Concorde fallacy’ which describes the principle quite well. It was the case that while designing the Concorde (a certain model of an airplane) the project was doomed to fail. However, the designers continued the project because they had already spent a lot of time and money on it. Ultimately the debts kept on rising. The ‘sunk cost fallacy’ can lead to irrational decision making.


We trust our memory, even if it's wrong at times

During criminal trials, testimonies from eyewitnesses are valued greatly. However, our memory isn't as accurate as we think it is. Even though eyewitnesses really believe what they think they've seen memory is susceptible to suggestions and biases.

It reaches such an extent that false memories can be created. An example of this is when participants took part in a study where they had to tell something about their childhood photos. They didn't know though, that among the photos was an altered picture depicting the participant in a hot air balloon (even though they've never flown in a balloon). On the first day of the experiment, the participants said they didn't remember the event. However, when the participants returned a week later to continue the experiment, 50% of them said they could recall the hot air balloon ride, and went as far as to describe their experience!


We're not good at statistics, yet we are not aware of this

Sometimes the opposite occurs. Curiously, you often see this with people who smoke. Statistically speaking, people who smoke have more chance of getting ill and experiencing ailments, but they'll often say something like: "I have an uncle who has been smoking his entire life and he lived up to the age of 86." In this instance, general statistics are ignored and only individual cases are taken into account.

We let our expectations shape our experiences

Because our brain is so lazy we have certain expectations stored, instead of analyzing each experience individually it is much more efficient to place it in an existing framework. Optical illusion are a good example of this, especially the reversed face illusion. Take a look at the picture displayed below. This face looks pretty normal, right? Now turn it upside down! 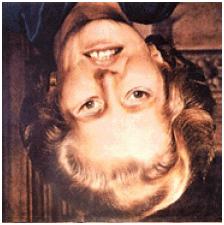 Regardless of what's happing in reality, we let our brain decide what we're experiencing.

We are prone to stereotyping people, even if we consciously try not to

It doesn't matter how hard we try not to stereotype, our brain is lazy and will automatically and unconsciously pigeonhole people. This can be advantageous in that we immediately know how to react in certain situations because we've experienced it before, but it can be negative because we generalize and ignore individual differences.
During a study, participants read a description about Linda: "She is 31 years old, single, smart and outspoken. She studied philosophy. As a student, she was concerned with topics such as discrimination and social justice. She participated in demonstrations against nuclear energy also." Next, the participants were asked if Linda was 1) a bank teller or 2) a bank teller and feminist. 85% of the participants picked option 2. Logically speaking if 2 is correct 1 must also be correct and thus more probable. Most participants could not help but stereotype.