Things you must know about your brain!

By Yannick27 December 2016
It may not seem very interesting at first sight, but in order to understand yourself and the people around us, you must know something about the 'thing' inside your head: your brain. What are the must-knows about your brain? You will know after reading this article!

Your brain is roughly the size of two fists. The brain is one of the most important organs in your body because it is the control centre for almost every activity of your body and mind. One of the few things our brains do not control are reflexes, which come from the spine.

Your brain consists of different parts that all have a different function. Your brain is comparable to a computer. If parts of a computer are damaged, the computer will perform less well (or worse: it may not function at all). Impairments or damage to the brain can lead to functional restrictions. Damage to the brain or a shortage of oxygen can have devastating consequences. The brain is a very fragile organ and it requires a lot of oxygen to function (about 20% of all the oxygen available in your blood is transported to your brain!). 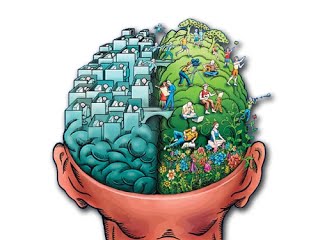 As mentioned above, damage to the brain can lead to serious impartments. Brain damage can be either a birth defect or it can be an acquired brain injury. People with defects from birth often have a severe mental deficit (as can be seen in underdeveloped motor skills). Brain damage can also be an acquired injury, as a result of an accident, a stroke, a tumor, oxygen-loss or an infection. Complications in the left hemisphere often lead to problems with speech, since this hemisphere is mainly responsible for language. Memory-problems are often the results of damage to the temporal lobe, while damage to the cerebellum often leads to impairments of movement.

So one hemisphere is better at certain tasks than the other. That is why it is not so hard to imagine that the brain of men and women differ as well. The brain of men and women have small differences, like shape, size or a certain braingrove, which means that men and women also differ in how well they perform on certain tasks. Men are in general better in spatial skills (which is processed in the right hemisphere) and women are in general better in language (the left hemisphere). But: this is not necessarily true for everyone! There are many women just as good as men in spatial skills. Do you want to know which of your brain hemispheres is more dominant? Take the test!

Or do you just want to start your brain training? Then go to our brain game page