The past couple of weeks, BrainGymmer went into the field and visited three nursing homes in Lelystad, The Netherlands.
On the 10th of April, we went to the nursing home “Woonzorg Flevoland”  to give a brain training workshop with BrainGymmer. There were ten participants with an average age of 80 years old. After a warm welcome and a cup of coffee, we started brain training.

After we explained what BrainGymmer is and what you can do with it, we handed out some exercises as a guideline for the participants. The participants were split up into five groups of two people to brain train together. It soon became clear that some of the participants had some trouble using the mouse. However, this problem was negligible later on as they got the hang of it. The group played different games and their results were quite impressive. It was a very enjoyable day thanks to the enthusiasm of the group!

Another day, another brain training clinic

On April 15 we had the pleasure of doing another workshop, also in a nursing home. The participating group was a bit smaller than last time (6 participants), but at least as motivated! After a kicked-off with a small introduction, we handed out the exercises. This time we chose not to divide the group in pairs, but we let them play alone to increase their concentration. And concentrated they were. You could fire a cannon in the room, but it is questionable whether they would have heard it...
We even found a brain training talent! The 83 years old lady played the game ‘Mentile’ as if she practised it daily! She managed to remember 10 tiles and turn them around in the right order. She has already signed up for the next world championship brain training. 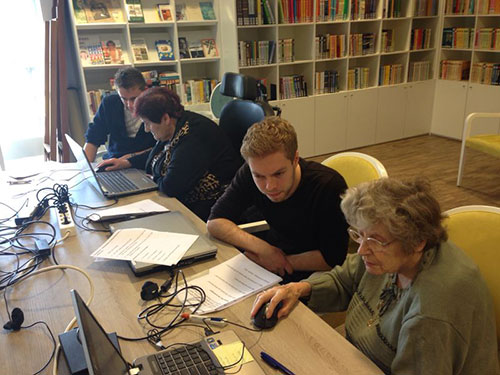 Brain training after a cerebral infarction

The last workshop was in nursing home Coloriet in Lelystad. The participating group was of a  more varied age range, from 45 to 87, with a variety of medical conditions. One of the participants, a 47-year-old man, was recovering from cerebral infarction and a heart attack. Before he was admitted to Coloriet he was working in the ICT industry. He told us that it was difficult for him to work with computers now and that this was very challenging for him, since he used to work with computers every day. Nonetheless, he found it very challenging and a good exercise to train the cognitive areas. Another participant of 83 even brought her own tablet to train with! 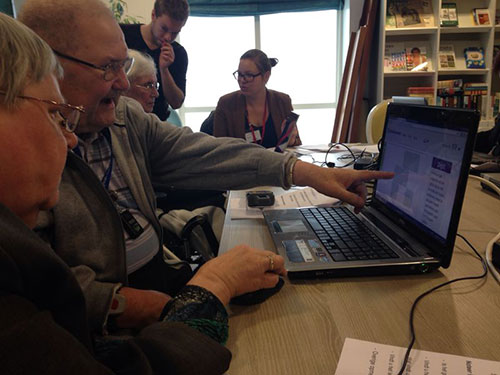 We would like to thank all the participants and supervisors for their enthusiasm and commitment!