Effects of alcohol on the brain

By Jochem22 January 2021
We live in an age of extreme awareness of what is (and is not) good for our health. Alcohol is widely recognized as one of the things to avoid to ensure a good healthy body and brain. How bad is alcohol really, and can the damaging effects of it be reverted somehow?

The effect of Alcohol on You

What alcohol does to the brain, although damaging, is coincidentally the primary reason we consume it in the first place: it shuts off certain processes in the brain and numbs you as well. Impulsive behavior, slurred speech, poor memory, and slowed reflexes are some of the characteristics of someone under the influence of alcohol. This can be quite pleasant to experience in the moment, but it’s good to be aware of what this actually does to the brain. Alcohol blocks neurons. Neurons are responsible for transmitting information between different parts of the brain. They play a huge role in memory (hence, if you consume too much alcohol you can have a so-called “black out”) and they keep the brain healthy and functional. Once the alcohol leaves your system, the brain has adapted to the state of ‘numbness’ and this means that it will overcompensate and react more heavily to stimuli. This is why a hangover can be so unpleasant because feelings of nausea and pain are experienced more intensely. Sounds are also louder and light seems brighter. And these are just the symptoms of someone having a hangover. Much worse damage can be done by a heavy drinker.

The effect of Alcohol on Heavy Drinkers 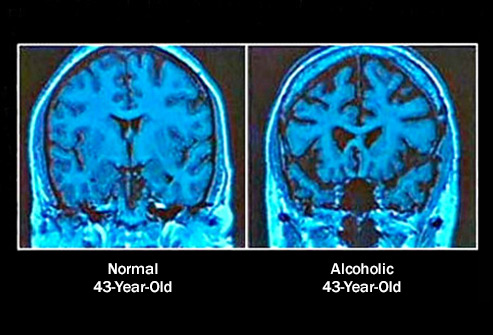 There are many things that can happen when the brain is overexposed to alcohol. The first is neurotoxicity. When a neuron is overstimulated for too long, it can eventually reach its maximum capacity and be destroyed. Neurons are extremely vital for a healthy brain, and reducing the number of them pretty much makes your brain worse at everything it does.

A second potential side effect of heavy drinking is ‘shrinking’ of the brain. Brain shrinkage occurs naturally due to aging but is accelerated by heavy drinking. It’s quite obvious that it’s not a good thing when your brain shrinks. The white matter in the brain reduces in size and therefore your brain has a reduced capacity. It is often reported by close family and friends of alcoholics that they no longer ‘recognize’ the person they once were. This is because parts of the brain that make a person who they are can literally be destroyed and shrunk away by heavy alcohol use over long periods of time.

Can This Be Reversed?

A question that springs to mind is if brain damage due to alcohol is permanent, or if something can be done to reverse it. New research has suggested that brain training could play a role in the cognitive rehabilitation of recovering alcoholics. GlobeNewsWire noted that “people with Mild Cognitive Impairment related to Alcohol Use Disorder noted significant overall cognitive improvements in patients who did [Braintraining]”. This means that training your brain can have a beneficial effect even on those who have a relatively deteriorated brain state. A good comparison is bodybuilding on someone who used to have an eating disorder. Even though damage was done to the body by suffering from, for instance, obesity, it is never too late to start eating healthy and working out, the body will find a way to adapt and return to a healthy state. The same principle seems to apply to the mind, which is great news for anyone who wants to make positive changes to their brain.

On Braingymmer.com, Brain training is made fun and easy. With our interactive games, you can train your memory, reaction speed, pattern recognition, and much more. This way, you can improve the health of your brain and have fun at the same time. Try it for yourself, there are 10 free games to play every week!