Exercising as addition on brain training

Exercise to improve your brain!

Many scientific studies about the effects of exercising on both the body and brain have been conducted. The results have shown us that exercising can have therapeutic effects for people dealing with anxiety, autism, depression, burn-outs, stress and much more. But why is exercising also good for our brain? One of the effects of exercise is that it improves the circulation of your blood within your brain. Clinical neuropsychology professor Erik Scherder said the following about this:
“More exercising leads to the better functioning of the cardiovascular system, and the hart is the pump for the brain. The brain has many brain cells and orbits, that connect the brain cells and different areas of the brain with each other. These connections are very sensitive to a good blood circulation. Exercising doesn't only have a positive effect on the brain, but it also has a positive effect on the chemistry within the brain. Exercising has a positive effect on many important substances that ensure the better functioning of the brain. Also, does it has positive effects too many areas within the brain, that play a major role in matters such as taking initiative or being motivated. “

Exercising makes you happy and keeps your brain young

Exercising also causes an increase of the neurotransmitter's dopamine, serotonin and endorphin. Endorphin is the fastest acting anti-stress hormone, dopamine improves your mood and happiness. Serotonin is a hormone that plays a role in your mood, impulse control and self-confidence. Serotonin also helps to prevent stress and makes the cell connections in the cortex and hippocampus ready as part of the learning process.
Through exercising, the substance “Brain-Derived Neurotrophic Factor” (BDNF) in the brain will be released. This is a substance that plays an important role in the recovery process of the brain. BDNF slows down the processes that cause Alzheimer's and dementia.

The effects of stress on your brain

Stress has a negative impact on your brain and can even cause the hippocampus to shrink. The shrinking of the brain affects your short-term memory and concentration. Also, does it make your hippo-campus function less, with the result that the brake on stress will decrease. This creates a downward spiral whereby there will be less inhibition of stress, followed by damage to the hippocampus, leading to less inhibition of stress etc. etc. etc.

Fortunately, our brains are able to repair the damage. To repair the damage, you have to ensure to reduce the amount of cortisol. This is where BDNF comes around the corner again because this increases the recovery of your nerve cells. But how do you take care of this? By exercising! Exercising at the right intensity appears to result in the production of BDNF. This means your brain can you increase the recovery of your brain if you exercise regularly. And how long, what kind of exercise and how often per week should you do this? We will explain how you can apply exercising the right way, leading to positive effects on your cognitive ability and brain in general.

Unfortunately, walking or cycling at a leisurely pace is not enough to make all these substances. You have to increase your heart rate at least. Also, running seems to have more influence on the production of these substances than strength- or interval training. 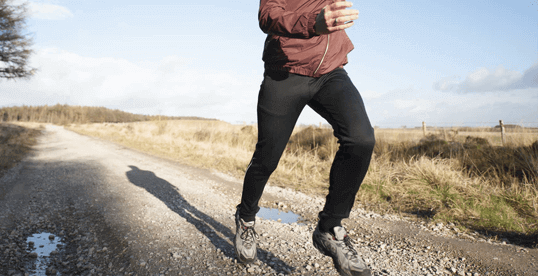 For those who are very active on a daily basis, this seems to have a counterproductive. By exercising too intensively the body creates the stress hormones adrenaline and cortisol. And the goal is to prevent the creation of these stress hormones. So, it is wise to exercise with 'moderately intensive effort'.